Choose Your Own Adventure: The Board Game; a bunch of new announcements, and what’s hot on Kickstarter on this week’s news brief!

Flipped to page 94 by Calvin Wong

Announcing the Choose Your Own Adventure Board Game

Nights spent up late reading; holding pages in with your thumb so you could rewind a bad choice – The classic Choose your Own Adventure series is being adapted into a board game

Specifically, book #6, House of Danger by R. A. Montgomery. “Notable characters in the book are Genghis Khan, human-sized Venus fly traps, a time-traveling group of Civil War prisoners, hologram chimpanzees, and an ending where you turn into a baby.” says the official press release.

The game will be produced by Asmodee, specifically Z-Man games, and is due to arrive before the end of the year, unless you turn to page 56, in which case you’re trapped in a time cube and must start over.

(for those unfamiliar with the CYOA series; it’s a book where you must make choices and the choices make you turn to specific pages. Imagine a branching, tightly controlled RPG narrative in book form)

If you’re itching for story-based games with a CYOA format, why not try the whimsical and gorgeous Near & Far?

Announcing Architects of the West Kingdom

The North Sea series moves into the West with new title Architects of the West Kingdom – a worker placement game of cathedral construction.

Featuring  Mihajlo Dimitrievski’s iconic art style, West Kingdom can be played from 1 to 5 players, and boasts variable player powers, area control, and a huge amount of replayability and unique paths to victory.

The campaign is now on Kickstarter.

Funforge is publishing Monumental, an epic board game of civilization, conquest, and expansion. It’s so big it comes in two boxes.

Featuring civilizations from China and Japan to Greece, Rome, and the Vikings, Monumental is Funforge’s experiment with a huge, miniature-strewn game (the company’s best known game is probably the very beautiful but very minimalistic Tokaido.

However, Monumental’s other experimental piece of the puzzle is its Kickstarter exclusive nature. People who want in on this epic game should head over to the KS campaign and drink in the prettiness.

From Weird Giraffe Games comes Fire in the Library, a game of history going up in smoke.

Push your luck and save the books in this easy to learn beauty that’s family friendly; the campaign  has plenty of gifs that explain the gameplay better than I can. Check it out!

Secret Unknown Stuff: Escape from the Dulce is a co-operative board game of retro sci-fi dungeon crawling that looks like it jumped straight out of an 80s Saturday morning cartoon. Do you want to play as a two headed cow with a missile launcher on its back?

And finally we have Terminus Breach, a Tower Defense board game with customizable maps, fantasy heroes, and a sleek retro look. 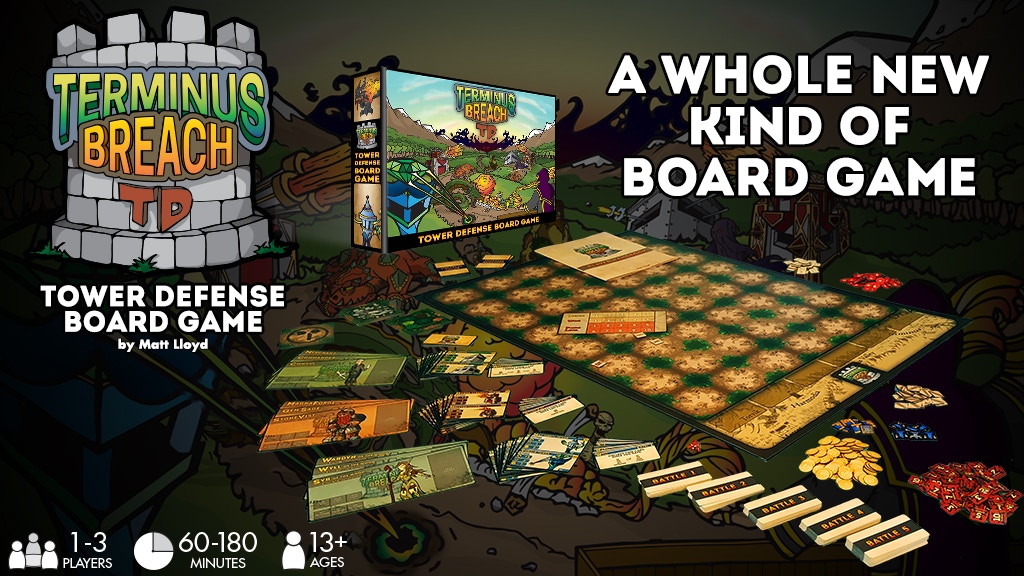 If you’d like to contribute to their Kickstarter and get some exclusive promos for games such as Scythe, Imperial Settlers, Terraforming Mars, Gloomhaven, and Clank! In! Space! – go here

And that’s it for the news brief! Thank you for reading, and be sure to check out the Golden Geek Award winners before they all go out of print!